On Friday, Obama will USE Giffords for political gain...AGAIN!

I am so happy for Gabrielle Giffords and her family that her recovery is going well, and that she can attend Friday’s shuttle launch!

That said, too bad Obama will be there too, because don’t think for a moment that Obama hasn’t already schemed out the political gain he can get by appearing there Friday. With her.

Just look at how Obama previously and consistently leveraged the Tucson tragedy for his own political (read: personal) gain. Let’s call the following VILE NEWS from the “Never Let a Crisis Go to Waste” front...

First, there was these despicable reactions to the shooting -- all orchestrated by the Democrat Media Complex:
“They need to deftly pin this [Tucson shooting] on the tea partiers. Just like the Clinton White House deftly pinned the Oklahoma City bombing on the militia and anti-government people.” ~a Democrat operative speaking on how Obama must parlay Jared Loughner’s evil into something tangibly good for Obama!
http://www.politico.com/news/stories/0111/47294_Page2.html

“Democrats plotted to blame Tea Party for slaughter. Of course, Politico buried it in their story.” ~Jim Hoft
http://bigpeace.com/jhoft/2011/01/09/breaking-democrats-plotted-to-blame-tea-party-for-slaughter/

Next, (of course) was the evil Left’s obligatory spin:
“The Tuscon shooting is Obama’s Oklahoma City moment!”
http://www.politico.com/news/stories/0111/47348.html

“…the instantaneous reaction of the hard Left, President Obama’s base, was to politicize the Tucson atrocity as a natural, an inevitable, result of conservative ideology, enthusiasm for immigration-law enforcement and gun ownership by law-abiding Americans, and dissent from Obama’s policies...” ~Andrew McCarthy
http://www.nationalreview.com/articles/256813/horrid-crime-dishonest-debate-andrew-c-mccarthy

And finally, there was what occurred at the memorial service, as reported by Judi McCleod:
University of Arizona brass did not originate the “Together We Thrive” T-shirt. They merely recycled it for Obama—and recycled it in time for what should have been a dignified Memorial for the dead. If you were a mourner who took home a “Together We Thrive” T-shirt have a look at the bottom of your shirt. “Rocking America and Rocking the Vote” is a common theme of the DNC, and it’s right there on your Memorial T-shirt memento. Welcome to the era of Obama, where cheering and standing ovations, for the first time in history, became part of the Requiem for the Dead.
http://canadafreepress.com/index.php/article/32138

Like I said, don’t think for a moment that Obama hasn’t already schemed out the political gain he can get by appearing there -- the “man” is truly disgusting.
Posted by Joe Kidd at 10:49 PM

Quiz Of The Day

Which ignorant fool said this: “She bleedin’, yo!”

1. The McDonald’s employee who idly stood by to record the beat down of a restaurant patron.
2. New Black Panther Party leader Malik Zulu Shabazz (AKA Paris Lewis) after killing a white baby.
3. President Barack Hussein Obama proudly proclaiming the damage he’s done to our beloved country.

A year after the spill, recall that Obama’s fingerprints were all over that disaster!

A year after the spill, recall that Obama’s fingerprints were all over that disaster:

1. Of all American politicians, Obama was documented as having received the most money from BP.

2. In 2010, BP was also one of three finalists for Obama’s Interior Department award for “Outstanding Safety and Pollution Prevention.” Prior to the disaster, the winner was scheduled to be announced on April 30, 2010, but because the Deepwater Horizon rig exploded ten days before, Obama had the announcement “delayed” (maybe because BP had originally won?!?)

3. And back in 2009, Obama actually recognized the very same Deepwater Horizon rig -- the one at the heart of this catastrophe -- as a “model of safety.”

Like I said, Obama’s fingerprints were all over this disaster!

After learning that Obama intentionally mislead Paul Ryan about the scope of his speech, and that Ryan and the other Obama-invited GOP members of the House Budget Committee had to sit there and listen to more Obama partisan crap and lies, I wish Ryan and the whole lot of them had walked right out during the speech -- live on national TV. Now that’s an “exit” strategy!
Posted by Joe Kidd at 9:59 PM

I’m having a real difficult time believing Barack Obama when he says, “I miss being anonymous,” when you can see right here that Obama couldn’t even walk around without KNOWING that everyone else was SEEING HIM clutch a GQ magazine…with his favorite person on the cover!

PS- See definition of “narcissist”
Posted by Joe Kidd at 7:44 AM

Obama saying he’s “not out of touch” -- at an Al Sharpton event(!) -- is proof how out of touch Obama really is. Seriously.

Obama also said he remembers pumping his own gas.

And I remember what it was like having a real president.

Lastly, Obama’s inane “pumping gas” comment can never translate to ‘I feel your pain’ -- but it actually does show everyone how this weasel of a prez hides from issues like the price of gas doubling.
Posted by Joe Kidd at 8:05 AM 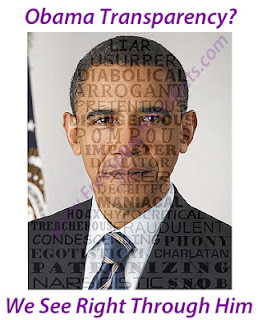 An Obama "transparency" conundrum -- "see" what I mean:

If it's there and we see through it, it's transparent.

But if we can't see it because it's not there, it's either been erased... or it's Obama's promise of "transparency," which is without because Obama won't let us see it. 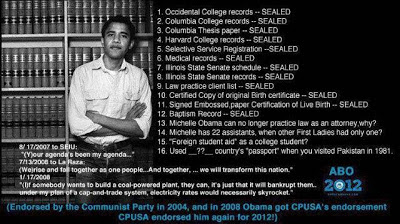 Barack Hussein Obama is unlike every past American president in that Obama REALLY DOES NOT BELIEVE in American Exceptionalism. To Obama -- being the never-ending campaigning narcissist he is -- it’s ALWAYS been him in 2012! Now most would agree all politicians want to be reelected, but in Obama’s case, “2012 or bust” literally means that:
Obama’s wish in 2012 is to RULE over a “busted” America. Of this, there is no doubt...
Posted by Joe Kidd at 5:19 AM

So much for them having “our back.”

In other words, so much for them having “our back.”

PS- Eric Holder would look good in an orange jumpsuit. Just sayin’...
Posted by Joe Kidd at 4:55 AM