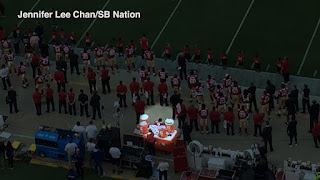 It is telling that the last high-profile individual to disrespect our flag and our national anthem became the sitting president, whose legacy of words and actions show he always intended to divide the country.

It is also a tragic irony that Kaepernick doesn't realize his protest is an admission that the last eight years have been an abject failure, that 'Hope and Change' was never the course this president set. And he now has the country exactly where he wants: On the precipice... in more ways than one.


PS- The next time Kaepernick is in the "film" room, he could invite Barack Obama to watch 'Remember the Titans' to learn something from one of its scenes about what it takes to come together.
Posted by Joe Kidd at 11:59 PM