Applying football jargon to the smash-mouth world of politics... 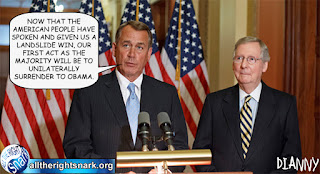 When I played football when I was younger, my dad told me about players who "heard footsteps," i.e., players who wouldn't or couldn't catch the ball over the middle because they feared the imminent hit. My dad said, "You're going to get hit anyway whether you catch the ball or not SO WHY NOT CATCH IT?!" His advice made sense, and it wasn't just for receivers, but for those who run the ball, so I used it to my advantage.

Sure, you can try to evade tacklers but when you know contact is inevitable, why not be the one delivering the punishing blow? Why not be the one imposing YOUR will upon others? That's why I admired Earl Campbell and Eric Dickerson, and The Great Jim Brown, who played before my time. I bring all this up to apply it in a political context.

No matter what, the GOP was going to get hit by the Obama regime, the Democrat Party AND so-called mainstream media -- they all share the same talking points. We know that. Yet, mush Republicans and RINOs STILL tried to appease Obama because they feared being hit. What cowards! 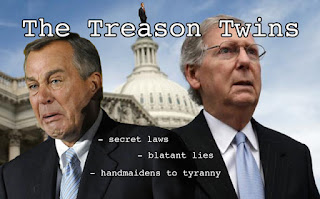 When it came time to leverage the TWO HISTORIC LANDSLIDE WIN MID-TERMS of 2010 and 2014, they put their political lives and their ruling-cla$$ power ahead of what was best for America. And in the process, in the meantime, their abandonment of us and their duties as Opposition Party caused our country undeniable damage.

And these so-called Republican "leaders" wonder why so many Americans are outraged? Give me a break! As far as I'm concerned, they and the Obama administration cronies they kowtowed to are all partners in crime. They are all thick as thieves. To Hell with Boehner, McConnell, and other Republicans who did not stand in Obama's way and stop his agenda. They are complicit in Obama's crimes and just as guilty. History will not look kindly at their unceasing capitulation to a lawless administration.

PS- The crying yes-man was duped (again). Boehner shouldn't put any stock in Obama calling him a "patriot". We're talking about a prez who doesn't know the first thing about being one.

I hear there's a job opening up
http://patriotretort.com/i-hear-theres-a-job-opening-up/

Why Are Republicans Complicit in Obama’s 3rd-World Transformation of America?
http://conservativepapers.com/news/2015/06/11/why-are-republicans-complicit-in-obamas-3rd-world-transformation-of-america/

Erik Rush: Let's be Honest -- It's Not Just Boehner and McConnell in the GOP Helping Obama Destroy America
http://eaglerising.com/23895/lets-be-honest-its-not-just-boehner-and-mcconnell-in-the-gop-helping-obama-destroy-america/
Posted by Joe Kidd at 3:23 PM


A jumble of firsts, some humorous, others rather dark and evil, and in no particular order...
Posted by Joe Kidd at 3:23 PM