Some links on the Democratic Party's history of racism, bigotry, segregation, and yes, the KKK 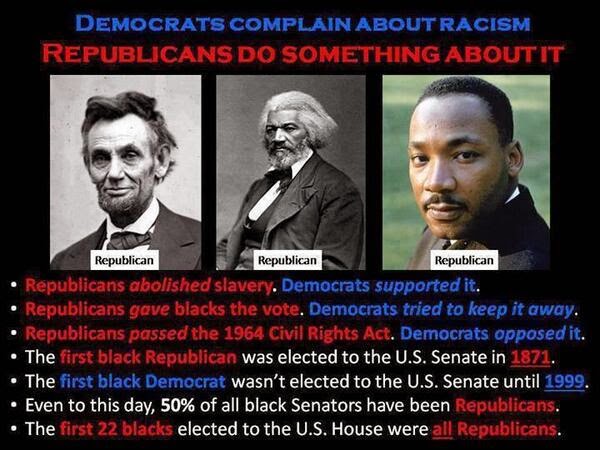 What follows is some information and links on who the real racists in this country were and are. And how, to this day, they still try to hide their disturbing past from normal examination. (It’s also a sad fact that many among them are the first to play the race card.)

● Democrats: The Missing Years; “The party that championed slavery and segregation erases its race record from history.”


[Excerpt] There is no reference to the formation of the Ku Klux Klan, which, according to Columbia University historian Eric Foner became “a military force serving the interests of the Democratic Party.” Nor is there reference to University of North Carolina historian Allen Trelease’s description of the Klan as the “terrorist arm of the Democratic Party.” [End]


[Excerpt] “The lies are big, bold and prominent. … There is no polite way to put it. This DNC website presentation is a lie. A deliberate, willful and very big lie. Hiding from the young, the innocent and the unwary the cold, hard and true facts of the Democratic Party’s horrific racial history. … This cultural rot has been the backbone of American liberalism and its political party the Democrats — for 212 years. No wonder the DNC feels it has to lie.” [End]

Articles above are by journalist and former Reagan administration official Jeffrey Lord. The first was published prior to the 2008 DNC, and the second before the 2012 DNC. 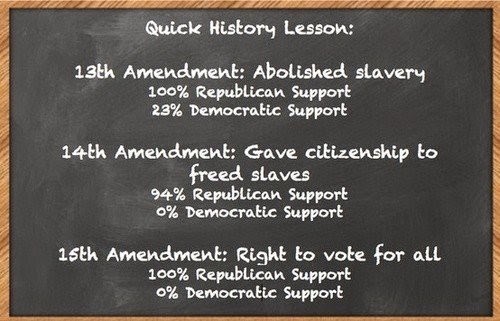 ● Some Of The Lost History In The Civil Rights Movement
http://www.canadafreepress.com/index.php/article/40889
***Warning*** This article has extremely offensive quotes from Democratic President Lyndon B. Johnson.

In 2013, news surfaced that President Obama not only followed a despicably-named Twitter account, he was its FIRST FOLLOWER!
http://www.theblaze.com/stories/2013/11/14/obamas-official-twitter-account-caught-following-outrageous-racist/

This was documented (complete with screen grabs) in the article titled, ‘Amazingly Enough, the Official Obama Twitter Account Actually Followed This Absurd Racist’. Obviously, “following” a Twitter account doesn’t necessarily imply endorsement of it or the content of its tweets, though in this case, we still do not know why the “official” Obama Twitter account DID follow it (until it was news — read into that what you will.) The account’s first tweet was sent January 7, 2009 — 13 days prior to Obama’s first inauguration.

More importantly, being this Twitter account’s FIRST FOLLOWER poses questions all its own. (For the record, ‘OFA’ was originally ‘Obama For America’. After his reelection, ‘OFA’ morphed into ‘Organizing For Action’.)

More disturbing would be the chance that President Obama (or Democrat officials on his Transition Team) created the account to keep their hate alive. Lest we forget what Booker T. Washington said over a hundred years ago in the language of his day:


“There is another class of colored people who make a business of keeping the troubles, the wrongs, and the hardships of the Negro race before the public.

Having learned that they are able to make a living out of their troubles, they have grown into the settled habit of advertising their wrongs — partly because they want sympathy and partly because it pays.

Some of these people do not want the Negro to lose his grievances, because they do not want to lose their jobs. There is a certain class of race-problem solvers who don’t want the patient to get well.”

That sounds like an indictment of the entire Obama administration and all of the race-hustling, race-obsessed “hate merchants” and charlatans that Barack Obama himself, for years now, has been regularly keeping counsel with, be they whatever color…

A personal observation to wrap things up:

The REAL injustice our country suffered the last several years may be how the election of the first African-American president — something we embraced and celebrated for its history alone — how it did not help race relations and racial unity because the individual elected never had such a goal. By words and deeds, Obama himself precluded that from happening!

The current president is no healer nor unifier, and the photos of him with a halo or surrounded by children and the Scripture cited by his minions won’t change that fact. Alas, too many on the left are still invested in him (or his skin color) to see the truth. Or too ashamed to admit he seduced them. That’s how Liberty dies.

We all belong to one human race... And we all bleed one color.

If only Barack Obama took Rev. Martin Luther King, Jr.’s advice and stopped his “drinking from the cup of bitterness and hatred,” many Americans of ALL colors wouldn’t be so dismayed... And it would be easier to rule out the idea of this divisive president who seemingly wants that color to run in the streets.

Democrats complain about racism.
Republicans do something about it.
https://joekiddone.files.wordpress.com/2015/05/6aefe-democratscomplainaboutracism-republicansdosomethingaboutit.jpg

FWIW: Much of the information above already appears in the post titled, “You only separate colors when doing wash” which serves two audiences: the ignorant who grievously play the race card, and the informed who are tired of it being played.