Remember this when Democrats blame GOP "budget cuts," "the sequester" or "government shutdown" for the Obama administration's incompetent response to the Ebola outbreak

● More Glenn Kessler: 'The absurd claim that only Republicans are to blame for cuts to Ebola research' = "Four Pinocchios."
http://www.washingtonpost.com/blogs/fact-checker/wp/2014/10/15/the-absurd-claim-that-only-republicans-are-to-blame-for-cuts-to-ebola-research/

● Say what?! [Quoting] The National Institutes of Health (NIH) has spent more than $39 million on obese lesbians, origami condoms, texting drunks, and dozens of other projects that could have been scrapped in favor of developing an Ebola vaccine. [End]
http://www.foxnews.com/politics/2014/10/17/3643352-worth-nih-funding-that-could-have-gone-to-ebola-vaccine/

● POLITICO: The Facts About Ebola Funding:

[Quoting] In recent years, the CDC has received significant amounts of funding. Unfortunately, however, many of those funds have been diverted away from programs that can fight infectious diseases, and toward programs far afield from the CDC’s original purpose.

Consider the Prevention and Public Health Fund, a new series of annual mandatory appropriations created by Obamacare. Over the past five years, the CDC has received just under $3 billion in transfers from the fund. Yet only 6 percent—$180 million—of that $3 billion went toward building epidemiology and laboratory capacity. Especially given the agency’s postwar roots as the Communicable Disease Center, one would think that “detecting and responding to infectious diseases and other public health threats” warrants a larger funding commitment.

Instead, the Obama administration has focused the CDC on other priorities. While protecting Americans from infectious diseases received only $180 million from the Prevention Fund, the community transformation grant program received nearly three times as much money—$517.3 million over the same five-year period. [End]

[Quoting] Spending grew rapidly under full GOP control and then leveled off at high amounts once divided government and the fiscal crisis kicked in. The report notes that "Pandemic Preparedness funding through the GHP account totaled $50 million, a decrease of $22.5 million (-31%) below FY14." Let's stipulate two things. First, $50 million is both a lot of money and not a lot of money in terms of federal spending. I doubt anyone seriously thinks that spending more in the year to come would have stopped Ebola outbreaks that began in fiscal 2014. Second, the requested decrease is in President Obama's budget. Is he a Republican now?

Then there's the National Institutes of Health (NIH), whose role in developing new medicines and interventions has been supposedly destroyed by cuts over the years, right? According to its budget documents, the NIH got about $23 billion in fiscal 2002 (George W. Bush's first budget year), a figure that rose to $30.2 billion in 2009 (his last budget year) before peaking at $31 billion in 2010. It dipped a bit from then and came to $30.1 billion in 2014, which is about the same amount the NIH requested in President Obama's 2015 budget plan. [End]

Ed Klein: "She [Valerie Jarrett] convinced the president that a government shutdown and default offered a great opportunity to demonize the Republicans and help the Democrats win back a majority in the House of Representatives in 2014. ... Valerie also came with the idea of using the words 'hostage,' and 'ransom,' and 'terrorists' against the Republicans."

An opinion: Aside from the fact that Democrats are averse to passing or even having a budget, i.e., "If you can't budget, you can't govern," expect them to continue to try and use this blaming strategy for whatever Obama failings apply, there are certainly enough of them.

Who knew that Obama's "We are the ones we've been waiting for" meant him allowing Ebola-infected non-U.S. citizens into America?!
http://networkedblogs.com/10Lsok

Who knew that Obama's "We are the ones we've been waiting for" from 2008 meant him allowing Ebola-infected non-U.S. citizens into America?! 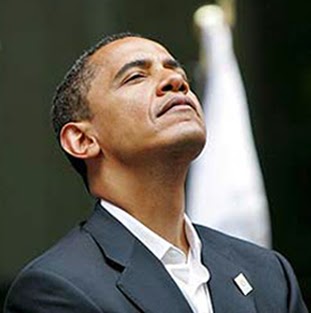 
"The plans include special waivers of laws and regulations that ban the admission of non-citizens with a communicable disease as dangerous as Ebola. One source tells us that the Obama administration is keeping this plan secret from Congress. The source is concerned that the proposal is illegal; endangers the public health and welfare; and should require the approval of Congress."


At a minimum, it suggests that he [Obama] takes his conception of himself as a citizen of the world more seriously than he takes his role as President of the United States. At worst, he may consider Americans' interests expendable in the grand scheme of things internationally. If so, this would explain a lot of his foreign policy disasters around the world, which seem inexplicable otherwise.

Those critics who have been citing Barack Obama's foreign policy fiascoes and disasters as evidence that he is incompetent may be overlooking the possibility that he has different priorities than the protection of the American people and America's interests as a nation.

This is a monstrous possibility. But no one familiar with the history of the twentieth century should consider monstrous possibilities as things to dismiss automatically. Nor should anyone who has followed Barack Obama's behavior over his lifetime, and the values that behavior reveals.

No one knows at this point how big the Ebola danger may turn out to be. But what we do know is that official reassurances about this and other dangers have become worthless.


Despite no official action from the president ahead of the election, the Obama administration has quietly begun preparing to issue millions of work authorization permits, suggesting the implementation of a large-scale executive amnesty may have already begun.

Unnoticed until now, a draft solicitation for bids issued by U.S. Citizenship and Immigration Services (USCIS) Oct. 6 says potential vendors must be capable of handling a “surge” scenario of 9 million id cards in one year “to support possible future immigration reform initiative requirements.”

The request for proposals says the agency will need a minimum of four million cards per year. In the “surge,” scenario in 2016, the agency would need an additional five million cards – more than double the baseline annual amount for a total of 9 million.

What Obama is doing is intentional -- his policies ARE WORKING...
at destroying America: #ClowardPiven
'Obama and the Cloward-Piven Strategy of Orchestrated Crisis'
https://www.facebook.com/notes/joe-kidd/what-obama-is-doing-is-intentional-his-policies-are-working-at-destroying-americ/705107972835094
Posted by Joe Kidd at 1:44 PM