New York Giants receiver Odell Beckham Jr. made a great catch against the Dallas Cowboys in the nationally-televised Sunday night football game. People are calling it "the greatest catch ever seen" -- social media is "blowing up" over it!

Is This the Greatest Football Catch of All Time?!

If only THE SIGNATURE ACHIEVEMENT of Obama's first term was talked about in the same way: how Obama LIED about ‪‎Obamacare‬! How cronies in his regime, including Jonathan Gruber, seemingly pulled off what arguably is "the greatest hoax" ever perpetrated against the American people. How every bit was sold with LIES.

Obama "owns" what happens in Ferguson


Obama "owns" the unrest and potential for violence in Ferguson. If more blood spills, it's on his hands. Call it "You reap what you sow." He was an instigator before, when he had Holder try to "light a fuse":

More recently, there is this, an Obama insider, a "ux engineer" for @barackobama, lying to create racial strife.


[Quoting] Manik Rathee worked for Obama for America, President Barack Obama’s re-election campaign, as a user experience engineer and front-end developer. He is currently an engineer at Google. In August, he tweeted that Ferguson, Mo., thug Michael Brown was “shot TEN times after stopping in the middle of the street and putting his hands up.” The official county autopsy (posted Tuesday night by the St. Louis Post-Disptach) suggests otherwise. [End quote]

● From August: How Ferguson rioters look and act like Obama
http://drrichswier.com/2014/08/15/ferguson-rioters-looters-look-act-just-like-obama/

America's current president cut his teeth as a Community Agitator. The situation in Ferguson, Missouri is a potentially explosive one, carrying with it national repercussions. It's a match Made. In. Hell. And we should have seen it coming...

This is what a Community Agitator does:

● SHOCKING PHOTOS: Barack Obama Appeared and Marched with New Black Panthers in 2007
http://pjmedia.com/tatler/2011/10/03/photos-barack-obama-appeared-and-marched-with-new-black-panthers-in-2007/
Note: The word 'Shocking' in this article's title fits because what occurred in 2007 -- what Bryan Preston reported -- is "shocking." Obama was already president when this article was published in 2011. After reading it, consider sharing it. It seems just as relevant today.

● The handwriting was on the wall: A 2007 speech by Sen. Obama revealing how far he will go to stir up hate. It may also tell us now how he will handle what appears to be the coming crisis in Ferguson.
https://www.facebook.com/notes/joe-kidd/have-you-heard-obamas-other-race-speech/811506935528530

● QUOTING: [T]he president’s verified Twitter account was the first to follow “@ihateni**ers.”
Source: ‘Amazingly Enough, the Official Obama Twitter Account Actually Followed This Absurd Racist’
http://www.theblaze.com/stories/2013/11/14/obamas-official-twitter-account-caught-following-outrageous-racist/
Note: For whatever reason, this news didn't come to light until 2013, four years after the despicably-named account posted its first tweet 13 days prior to Obama's 2009 Inauguration. Perhaps someone on his transition team was busy. Article includes update and screen grabs.

RECENT NEWS LINKS ON THE STATE OF EMERGENCY DECLARED:

● Alleged officer warns Ferguson ‘If you do not have a gun, get one’
http://stlouis.cbslocal.com/2014/11/18/report-alleged-cop-warns-ferguson-if-you-do-not-have-a-gun-get-one/

Learn more about who's behind the Ferguson protests and who's looking to take advantage. It's almost corporate, as in Obama, Inc.:

● Behind the 'Don't Shoot Coalition' in Ferguson
http://www.americanthinker.com/articles/2014/11/behind_the_dont_shoot_coalition_in_ferguson_.html

● Ferguson "coalition" is a facade for progressive activists
http://www.americanthinker.com/articles/2014/11/dont_shoot_coalition_in_ferguson_a_faade_for_progressive_social_activists.html

A flashback, for what it's worth: "Never letting a crisis go to waste."
http://www.youtube.com/watch?v=1yeA_kHHLow 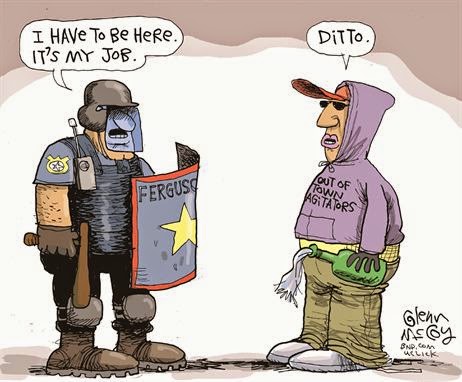 Finally, Robert Charles asks "the question of the hour":


[K]nowing that violence looms in Ferguson, as an unknown Grand Jury ruling hangs in the offing; that racial tensions are high; that sides are even now being taken; that both the citizenry and others are armed to the teeth; that senseless violence is predicted from all quarters; and that national leaders of all stripes could help suppress that tendency...where are those national leaders? Why are they not in Ferguson, walking the streets, working to calm mounting tensions?"

Comment section of original post will be updated with related news.
Posted by Joe Kidd at 7:24 PM

Lt. Frank Bullitt has a message for Obama... Frank Bullitt's response is a natural when one likens it to how the two-faced Obama reacted shortly after being smacked down, i.e., still touting compromise while threatening he will act alone.

And in view of Obama once conceding, "I don't really care to be president without the [Democratic majority-controlled] Senate," this quote from Lt. Frank Bullitt also seems more than applicable today: "Get the hell out of here now." TRANSLATION: "RESIGN NOW."

These 'Bullitt' quotes are one way to express an opinion on what looks to be the coming Constitutional crisis: "King" Obama unlawfully acting on his own to shove his "executive amnesty" down America's throat.

Never mind the U.S. Constitution and how it's supposed to work... Never mind what most citizens think in poll after poll on this issue... Never mind the 2014 election results and the historic "wave," i.e., We the People have spoken!

This radical leftist is intent on completing HIS agenda. Then again, based on his actions these past six years, we almost knew that whatever the outcome in the midterms, this was going to happen. Obama is what he is.

As Bryan Preston writes, "Obama's threat to carry out a unilateral amnesty for millions of illegal aliens threatens the system that he claimed to defend just over a year ago. And he is well aware of that."

UPDATE 13Nov2014
VIDEO: Obama makes the case against his executive amnesty
Mary Katharine Ham: "In which Obama of 2014 deeply disappoints the Constitutional professor Obama of yore. David Rutz of the Free Beacon puts together a montage of the president's lectures on the dangers and illegalities of a president who acts like him."


Hot Air link also includes a video compilation of Obama vs. Obama "in his own words."
Posted by Joe Kidd at 11:07 AM

Columnist Michael Goodwin tells us why today’s Democratic Party “must be punished”: 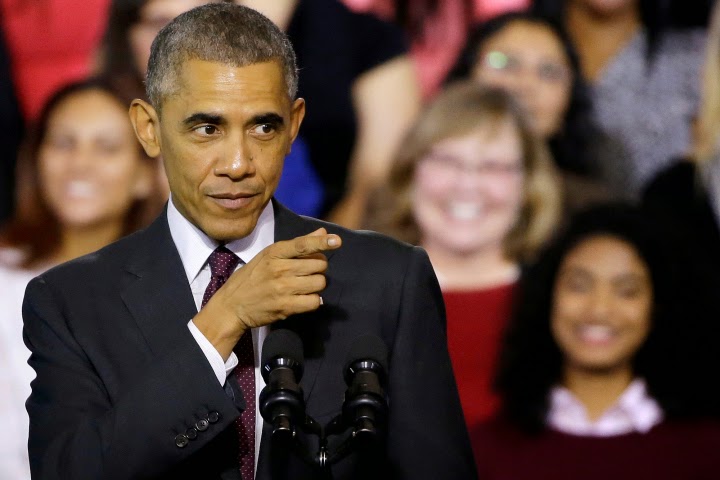 An excerpt from the Pulitzer Prize-winner’s latest column titled ‘Obama always pointing the finger of blame at someone else’:

[Quoting] We are witnessing the total collapse of a bad idea. Obamaism, a quasi-socialist commitment to a more powerful government at home and an abdication of American leadership around the world, is being exposed as a historic calamity. It is fueling domestic fear and global disorder and may well lead to a world war.

If there is a smidgen of a silver lining, it is that the unraveling, complete with Obama’s shameless attempts to duck responsibility, is playing out on the eve of the midterm elections. Fortunately, voters seem ready to respond by giving Republicans control of both houses of congress.

I second that emotion, and not just because Obama is a failure. For all his narcissism, he didn’t make this mess alone.

He was aided and abetted by every Democrat in Congress. They marched in lockstep with his cockamamie policies, from ObamaCare to open borders. They protected corrupt leaders in numerous federal agencies, from the IRS to the Genera Services Administration. They stymied efforts to find the truth about Benghazi and the Fast and Furious gunrunning debacle.

They ceded their constitutional obligations and allowed Obama to crash the system of checks and balances. The vast majority stood silent while he gutted the military and abandoned our allies, including Israel, Egypt and Saudi Arabia, and courted Iran, the most menacing nation on earth.

With painfully few exceptions, Democrats put their loyalty to him above their duty to America.

And now they must be punished. All of them.

Normally, I am not a partisan advocate. I am a registered Democrat, though I vote as an independent.

Not this year. This is a national emergency and the only responsible action is to vote Republican for every federal office.

Sparing even a favorite Democrat or two could allow Obama to spin defeat as a minor loss. Most worrisome, if Dems keep the Senate, the election will further entrench a corrupt government and further erode America’s strength and influence.

That is not a chance worth taking. Six years is enough. Collective punishment is the appropriate answer.

If there were any doubts the Obama Democrats cannot be trusted, look at their scurrilous campaigns. From coast to coast, their message is uniformly odious: Republicans are waging a “war on women” and they are racists.

That’s it. They can’t defend the legislation they passed, the economy they produced or the foreign policy they supported. Most don’t want to be seen with Obama, yet they take the money he raises and follow his lead in exploiting race and gender fault lines.

Scraping the bottom of the rancid barrel, they prove they will do anything to hold on to power. They cannot be allowed to succeed.

It is time for them to go. [End quote]