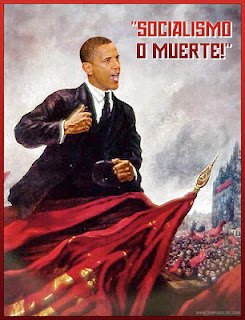 Victor Morton reports: The Obama campaign apparently didn’t look backwards into history when selecting its new campaign slogan, “Forward” — a word with a long and rich association with European Marxism.

Many Communist and radical publications and entities throughout the 19th and 20th centuries had the name “Forward!” or its foreign cognates. Wikipedia has an entire section called “Forward (generic name of socialist publications).”

“The name Forward carries a special meaning in socialist political terminology. It has been frequently used as a name for socialist, communist and other left-wing newspapers and publications,” the online encyclopedia explains.

The slogan “Forward!” reflected the conviction of European Marxists and radicals that their movements reflected the march of history, which would move forward past capitalism and into socialism and communism.

The Obama campaign released its new campaign slogan Monday in a 7-minute video. The title card has simply the word “Forward” with the “O” having the familiar Obama logo from 2008. It will be played at rallies this weekend that mark the Obama re-election campaign’s official beginning.

There have been at least two radical-left publications named “Vorwaerts” (the German word for “Forward”). One was the daily newspaper of the Social Democratic Party of Germany whose writers included Friedrich Engels and Leon Trotsky. It still publishes as the organ of Germany’s SDP, though that party has changed considerably since World War II. Another was the 1844 biweekly reader of the Communist League. Karl Marx, Engels and Mikhail Bakunin are among the names associated with that publication.

Vladimir Lenin founded the publication “Vpered” (the Russian word for “forward”) in 1905. Soviet propaganda film-maker Dziga Vertov made a documentary whose title is sometimes translated as “Forward, Soviet” (though also and more literally as “Stride, Soviet”).

Conservative critics of the Obama administration have noted numerous ties to radicalism and socialists throughout Mr. Obama’s history, from his first political campaign being launched from the living room of two former Weather Underground members, to appointing as green jobs czar Van Jones, a self-described communist.

Finally, the political cartoon pictured below seems rather seemly -- and more than appropriate -- when one considers the “creepy” path Obama seems intent on dragging us down... 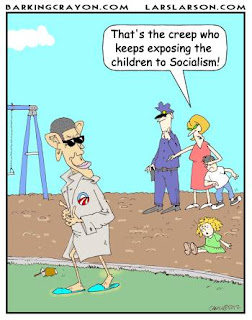 “Four years ago, America elected the biggest celebrity in the world, and America got ONE COOL PRESIDENT.”

But after 4 years of a celebrity president…
So after four years of Obama, are our lives any better?!? Uh, no...

Then it’s time to face it, America: Obama IS NOT “cool”.

I anticipate seeing more celebratory chest thumping, false bravado, and disingenuous apologies from him, especially if he is not stopped.

But the fact is if he wins, I’m certain that we’ll see him standing over the vanquished -- gloating -- after knocking him to the ground with his vicious Left.

Who am I talking about?
Not the Artest formerly known as Ron.

What am I talking about? Not world peace.

Actually, it’s more like country chaos, because I’m talking about The Thug that is Obama. And the vanquished will be Uncle Sam (and the rest of us, including James Harden), if we allow it.

Because we already know how thugs like Obama operate. It’s called “The Chicago Way.” We go to the polls. The New Black Panthers are there (with Obama approval) to intimidate. We work to stop Obama. He secretly (he thinks) tells the Russians that concessions are around the corner. We can’t believe what’s happening to our country and what we’re hearing. He plays off committing “open mic” treason.

But we see right through him. We recognize his comment, heard over an open microphone, as a threat. And we already know that Obana saying “after my election I have more flexibility” means more than him being spineless.

So as you think about the upcoming playoffs, er, I mean election, please remember the beating Obama gives to our beloved country. And tell your friends to never again buy into the guys, er, guise of “hope” and (a name) “change” or we will ALL be out for the count.

Political links…
Rush Limbaugh: “Why would Obama say that if he didn’t have to? If he had been told that the preliminary vote on Friday was in his favor, why take the attitude that he took?” There is an answer to that. I don’t know if it’s right, but there is an answer. He’s a thug.
http://www.rushlimbaugh.com/daily/2012/04/03/obama_puts_out_figurative_bounty_on_supreme_court

Obama's 'flexibility' offer to Russians is frightening - USATODAY.com
“After my election, I have more flexibility.” ~Barack Obama to Dmitry Medvedev, heard over an open microphone, March 26
Dr. Charles Krauthammer: “You don't often hear an American president secretly (he thinks) assuring foreign leaders that concessions are coming their way but that they must wait because he's seeking re-election and he dare not tell his own people.”
http://www.usatoday.com/USCP/PNI/Editorial/2012-04-03-PNI0403opi-krauthammerPNIBrd_ST_U.htm

A Conversation from Yesterday Morning at the Obama White House?!?

First Lady: Good morning, Barack. I’ll be campaigning for you down in bible country, today -- Nashville specifically -- and you know that I’ll say or do anything to keep this gig going for another four years. There are still so many exotic places to see!

Obama: Yes, last night, I could tell you were ready to work, I mean, see Cartagena.

First Lady: Oh, Barack -- talk like that will get you cheeseburgers . . . with extra bacon! Oops, sorry.

Obama: That’s okay -- just no dog recipe jokes. The fundraising trips that Bo and I just started are going great -- we’re reaching the “Aw, puppies are cute” demographic, and they think I’m cute too!

Obama: Of course, Michelle. Anyway, I was studying my Alinsky again last night -- the copy I keep on my nightstand -- and when I revisited Saul’s acknowledgment to the very first radical Lucifer, he gave me an idea!

First Lady: Who? Saul or Lucifer?

Obama: That doesn’t matter -- it’s the idea I got. Today, while you’re deep in the midst of all those “bitter clingers” I want you to quote some scripture!

First Lady: Oh, Barack -- I love when you’re blasphemous! It reminds me of how we met -- it’s so exciting!

Obama: Yes, I know -- Reverend Wright told me that before he married us. Anyway, do that and I’m sure our minions in the media will run with it -- how exciting will tonight be for the both of us, seeing stories comparing me to Jesus complete with my own halo! Sounds good, huh?!?

First Lady: That’s a date! With my own 5 TRILLION DOLLAR MAN!

Say what?!? Michelle Obama says, 'This President Has Brought Us Out of the Dark and Into the Light'
http://www.weeklystandard.com/blogs/michelle-obama-president-has-brought-us-out-dark-and-light_640374.html

You are what you eat?!?
Romney Campaign Notes that Obama as a Boy Ate Dog Meat*
http://abcnews.go.com/blogs/politics/2012/04/obama-as-a-boy-ate-dog-meat/

Quoting from the article… “In 1998, a small Chicago theater company staged a play titled The Love Song of Saul Alinsky, dedicated to the life and politics of the radical community organizer whose methods Obama had practiced and taught on Chicago’s South Side. Obama was not only in the audience, but also took the stage after one performance, participating in a panel discussion that was advertised in the poster for the play.”
http://www.breitbart.com/Big-Government/2012/03/04/obama-alinsky-love-song

Alinsky and Obama share much in common. Here’s a pre-2008 election article on then-Senator Obama and his Alinsky roots that is both fascinating and timely.
It’s title? “Obama: Lucifer Is My Homeboy.” Enjoy!
http://www.humanevents.com/article.php?id=28597

Bill Whittle takes on some of the Obama Merchants of Despair, and Obama himself, then takes him down!

Bill Whittle makes the case here in clear, concise language that even a Liberal could understand (well, maybe) on who Obama and some of his Merchants of Despair are, and what damage they have done to America AND ARE STILL DOING. There is no rebuttal.

And Mr. Whittle finishes strong by taking on Barack Obama himself, then taking him down!

Unfortunately, I believe Dinesh D’Souza is correct when he says, “Obama has a dream -- a dream from his father. That the sins of colonialism be set right, and America be downsized.”

“We will preserve for our children this, the last best hope of man on earth, or we will sentence them to take the first step into a thousand years of darkness.”

Perhaps both knew the day has come when the Father of Lies now has a son called Obama in the White House.
Posted by Joe Kidd at 11:28 AM