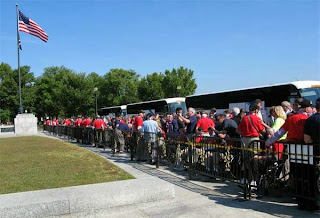 Mark Levin weighs in on the arrest threat that Veterans faced when visiting Memorials that Obama's government shutdown "Barrycaded":


I'm going to tell you folks something. I want to say this loud and clear to the people on Capitol Hill who are listening, to this administration -- you lay one damn hand on one of those World War II vets at that memorial, I'll bring half a million people to that damn memorial! You got that?!

I'm sitting here stewing thinking about this. Playing these damn games? You will ignite a movement in this country like you've never seen before. The biker patriot army, veterans from all over the country -- every single war and battle in this country. Republican, Democrat, Independent, whatever!

These men are in their 80s and 90s. So let me repeat. You lay one hand on one of those men and arrest them for going to their memorial, which they fought for, which was not paid by you, damn it. It was paid by the American people.


SOURCE: Mark Levin to Obama: You lay one hand on WW2 vets and I’LL BRING HALF A MILLION PEOPLE TO THAT MEMORIAL! 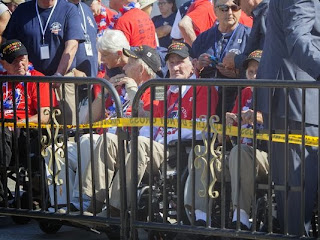 With all that's happening to our country under Obama, one could imagine that there are more than a few WWII Veterans out there in their 80s and 90s who'd like to go "old school" on Obama and ask him this question: "Do you like your front teeth?!?"

Confirmed: Obama deployed more guards to block World War II vets from their memorial than he sent to save our people in Benghazi

No Gov't Shutdown will ever keep War Veterans from their Memorial


Sarah Palin: My Call For Civil Disobedience Around The “Barrycades”

Obama admin. knew about WWII veterans’ request and rejected it!

SEE ALSO: Honor Flight Network, (quoting) "a non-profit organization created solely to honor America's veterans for all their sacrifices. We transport our heroes to Washington, D.C. to visit and reflect at their memorials. Top priority is given to the senior veterans – World War II survivors, along with those other veterans who may be terminally ill. Of all of the wars in recent memory, it was World War II that truly threatened our very existence as a nation—and as a culturally diverse, free society. According to the Department of Veterans Affairs, an estimated 640 WWII veterans die each day. Our time to express our thanks to these brave men and women is running out."


NOTE: If you need further proof of the absolute contempt that Obama has for our military, read about 'The most vile Obama photo-op ever' that Obama used to get reelected.

More arrest threats: Priests who minister to troops during shutdown

A senior Obama administration official on how long the shutdown could last: "We are winning. It doesn't really matter to us..."

New York Times Chief Washington Correspondent David E. Sanger, who's been working in DC for decades: "This is the most closed, control-freak administration I've ever covered."

A Washington DC Park Service ranger, when asked about the harassment. "It's a cheap way to deal with the situation. We've been told to make life as difficult for people as we can. It's disgusting."
Posted by Joe Kidd at 10:33 PM