When the person “occupying” the Oval Office...

When the person “occupying” the Oval Office...
1. Says the police “acted stupidly,”
2. Practices his divisive Politics of Envy,
3. Refuses to condemn “Occupy” violence,
4. Continuously brews and stirs a pot of Hate,
5. Refers to Tea Party citizens as “hostage-takers,” and
6. Orders supporters to “punish our enemies” (fellow Americans!)
...that’s when his complete and utter disregard for civility AND the Rule of Law pose a threat to the Republic.
Posted by Joe Kidd at 8:48 AM

Of course Obama would downplay his self-instigated confrontation...

Of course Obama would downplay his self-instigated confrontation with the Lady governor of Arizona:

1. Obama lost! And the world saw Obama for what he really is:
A thin-skinned petulant punk who got schooled!

2. We’ve all read the simple yet dignified letter the Lady governor graciously presented “his lowness” upon arrival.

4. And Jan Brewer’s explosive new book Scorpions for Breakfast is now climbing faster on bestseller lists than a rising Phoenix.

That said, and knowing how spiteful Obama and all of his minions can be, I pray for Arizona Governor Jan Brewer’s safety. Seriously.

I mean, how many tens of thousands of people have been murdered just across the border in a drug war Obama is helping fuel by arming the drug cartels?!?

They don’t say “Drugs kill people, and Drug Cartels ARMED BY OBAMA kill people” just for nothing. Arizona IS a battleground…literally.

All it would take (God Forbid) is some Jared Loughner-wannabe wearing a “Together We Thrive” T-shirt -- and don’t think Obama’s Dem operatives wouldn’t welcome that -- they already tried parlaying the Tucson shooting into Obama’s Oklahoma City moment.

And that was and is unconscionable.

Then again, what is at stake?!? Besides the safety of Jan Brewer and other law-abiding Citizens who live and work near the border, the real prize is who wins in November. And Obama has already shown that he will do or say ANYTHING to get that prize. God Forbid…
Posted by Joe Kidd at 8:31 AM

UPDATED: Arizona Governor Jan Brewer talks about what happened after she graciously greeted our petulant prez:
DRUDGE FLASH: OBAMA HAS HEATED ARGUMENT WITH AZ GOV
Barack Obama proves yet again how petulant of a prez he is when, after being graciously greeted to the great state of Arizona by the Lady governor there, Obama immediately turns the subject onto himself (naturally) and takes Author Jan Brewer to task for the way he is factually portrayed in the book she wrote?!?
Wow. That Obama is one petulant prez.
And AZ Governor Jan Brewer is a Lady!


Let’s just say Obama’s reputation precedes him...
From Jonathan V. Last of The Weekly Standard:
Drudge has a story about Obama getting off of Air Force One in Arizona, greeting Republican governor Jan Brewer, and immediately giving her a piece of his mind. Evidently our president did not appreciate something Brewer wrote about him. According to the pool report, they had a testy exchange from which the president walked away as Brewer was still speaking.

Sound familiar? Bobby Jindal got the same treatment when Obama came to visit Louisiana and the governor met him on the tarmac. Jindal would later recount in his book:

I was expecting words of concern about the oil spill, worry about the pending ecological disaster, and words of confidence about how the federal government was here to help. Or perhaps he was going to vent about BP’s slow response. But no, the president was upset about something else. And he wanted to talk about, well, food stamps. Actually, he wanted to talk about a letter that my administration had sent to Secretary of Agriculture Tom Vilsack a day earlier.

But somehow, for some reason, President Obama had personalized this. And he was upset.

There was not a word about the oil spill. He was concerned about looking bad because of the letter. “Careful,” he said to me, “this is going to get bad for everyone.”

If only he’d be so assertive with America’s enemies. But then again, I suppose, an “enemy” is really in the eye of the beholder. 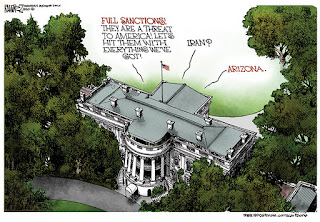 PS- Barack Obama’s skin is so thin, if he had to box his way out of a paper bag, it would not be a pretty sight.
(Picture Chuck Wepner, AKA the Bayonne Bleeder.)

In closing, I imagine most Americans would have a heated argument with Obama if they had the chance... 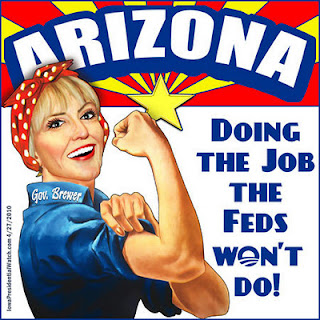 Next on my reading list: Scorpions for Breakfast: My Fight Against Special Interests, Liberal Media, and Cynical Politicos to Secure America's Border, By Jan Brewer

Book Description: Sometime after dark on March 27, 2010, Arizona rancher Robert Krentz was found dead next to his four-wheeler on the grounds of his ranch on the Arizona-Mexico border. Krentz and his dog, Blue, had been missing since that morning. They were last heard from when he radioed his brother to say that he’d found an illegal alien on the property and was going to offer him assistance. The man Krentz encountered that day shot and killed him and his dog, without warning, before escaping to Mexico.

It’s difficult to overstate the impact of Krentz’s death, which turned the issue of Arizona’s unsecured border—a crisis that the federal government had repeatedly ignored—into a national concern. As Arizona sheriff Larry Dever said in his testimony before the Senate Homeland Security Committee, “We cannot sit by while our citizens are terrorized, robbed, and murdered by ruthless and desperate people who enter our country illegally.” This momentum helped pass SB 1070, a bill that authorizes local law enforcement under certain conditions to question persons reasonably suspected of being illegal aliens, which Governor Jan Brewer and the state legislature had been working on for months. With the passage of this controversial bill, the state of Arizona became ground zero in the impassioned debate over illegal immigration. The Democrats and the media went into overdrive, denouncing the state and its governor as racists and Nazis.

Governor Brewer, a lifelong Arizona resident with deep ties to the community, was first elected to the Arizona House of Representatives in 1982, and hasn’t lost an election since. As a state official, she watched with increasing dismay as illegal immigration exploded across Arizona’s border, and noticed the devastating effect it was having on the state. Causing an escalation in violence, an influx of drugs, and prisons and hospitals to fill to overflowing, this problem was not only wreaking havoc on the moral fabric of the community but placing an even greater strain on Arizona’s beleaguered health, educational, and social welfare networks. Growing frustrated with the failure of the federal government to respond to her pleas for assistance, Governor Brewer led the state to action. Scorpions for Breakfast is Brewer’s commonsense account of her fight to secure our nation’s border in the face of persistent federal inaction. Her book is vital reading for all Americans interested in the real change that can happen when local leaders take the initiative to preserve our country and our laws.
http://www.amazon.com/Scorpions-Breakfast-Interests-Politicos-Americas/dp/0062106392
Posted by Joe Kidd at 2:38 AM

A SHAMEful act by a SHAMEless shill

The Weekly Standard’s Daniel Halper reports: “On the Sunday before the Martin Luther King Jr. holiday, senior White House adviser Valerie Jarrett visited Ebenezer Baptist Church in Atlanta to give a political speech, in support of her boss (Barack Obama) and congressional Democrats. … At the end of Sunday's sermon, after Jarrett had delivered her remarks to the congregation, the church held a voter registration drive.”


Just call this for what it is: a SHAMEful act by a SHAMEless shill.

Liberals often insist that somehow, magically, between the 50s and the Civil Rights Act of 1964, the racist Dems and the reforming freedom-loving Republicans ‘switched places’ and Republicans were now the evil racists. This video addresses that goofy notion:


Be sure to check out Kevin Jackson’s blog at
http://theblacksphere.net/

Democrats: The Missing Years
Jeffrey Lord: “The party that championed slavery and segregation erases its race record from history.”

The Obamas are haunting people themselves.

Learning that the Obamas put more “faith” and energy into their haunted Halloween celebrations and top secret Alice in Wonderland bash -- complete with “punch served in blood vials” -- is more than disturbing. But their cover-up of the partying makes that even worse.

Yes, many never imagined the White House being bathed in orange light -- for three straight Halloweens -- but that was in the news.

What else now, besides the Obama-partying excesses, can we expect to reach the disinfecting light of day?!?

PS- The Obamas are haunting people themselves.
Posted by Joe Kidd at 3:57 PM

Barack Obama is NOT “lawful authority.” The Constitution is.

Barack Obama is NOT “lawful authority.” The Constitution is. And he has knowingly violated it, even by the testimony of his own solicitor general. On this front and many others, the man must be stopped. Period.” ~Quin Hillyer

Obama The Tyrant Must Be Stopped -- The American Spectator
http://spectator.org/blog/2012/01/05/obama-the-tyrant-must-be-stopp
Posted by Joe Kidd at 7:57 AM

• First President to issue
an unlawful "recess-appointment" while the U.S. Senate remained in session (against the advice of his own Justice Department).

• First President to
halt deportations of illegal aliens and grant them work permits, a form of stealth amnesty roughly equivalent to "The DREAM Act", which could not pass Congress

• First President to
sue states for requiring valid IDs to vote, even though the same administration requires valid IDs to travel by air

• First President to "
Order a Secret Amnesty Program that Stopped the Deportations of Illegal Immigrants Across the U.S., Including Those With Criminal Convictions"

• First President to
Terminate America's Ability to Put a Man into Space.

• First President to
refuse to comply with a House Oversight Committee subpoena.

• First President to
File Lawsuits Against the States He Swore an Oath to Protect (AZ, WI, OH, IN, etc.)

But remember: he
will not rest until all Americans have jobs, affordable homes, green-energy vehicles, and the environment is repaired, etc., etc., etc.

When you think “Obama” and “Iowa” together, THIS ONE THING should come to mind.

Yesterday, the Campaigner-in-Chief that is Barack Obama unsuccessfully tried stealing the GOP’s Iowa Caucus thunder by holding a “virtual” Iowa media event of his own (naturally).

More importantly, for many Americans, this story brought to mind a VERY REAL visit to Iowa that the former Senator once made that is just impossible to forget. That’s because a craven image of a constantly campaigning candidate was captured for all eternity -- an image so disrespectful and disgraceful, it seared minds like a lightning bolt that scorched the Earth where he once stood.

Tom Harkin’s Iowa Steak Fry was about to officially begin when Barack Obama willfully decided he would NOT stand at attention to face the American Flag. Then, as the first notes of the Star-Spangled Banner echoed across the land, Obama REFUSED to put his hand over his heart during the playing of our National Anthem.

Repeat: Obama REFUSED to put his hand over his heart during the playing of our National Anthem.

United States Code, 36 U.S.C. § 301, states that during a rendition of the national anthem, when the flag is displayed, all present except those in uniform should stand at attention facing the flag with the right hand over the heart.

It should also be noted that during yesterday’s “virtual” Iowa event, a “nostalgic” Obama was full of pride at what had happened in Iowa.

Sadly, Obama’s disrespect for America did not start that fateful day or with that image. But THIS we know for sure: When the words “Obama” and “Iowa” appear together, that image of an absolutely despicable Obama is THE ONE THING that will always come to mind.

PS- I’m just one American who sees RIGHT through the person who’s pictured there on the left.
Posted by Joe Kidd at 2:34 AM