With news that the FBI has launched an investigation into Democrat Senator Bob Menendez for having sex with underage girls, it is natural to wonder if Barack Obama, a father himself, regrets his actions of a few months ago where his interference in a different investigation aided fellow Democrat Bob Menendez. Recall that last week, the Associated Press reported someone in "Washington" [Read: Barack Obama] exerted pressure and ordered federal agents to "hold off" on arresting a Bob Menendez intern until after November's election (which, of course, Menendez went on to win).

This question remains: Would Obama have done things differently knowing what he knows now? Based on his actions, the answer is a resounding "No." Barack Obama already showed his true colors last fall when he consciously made the decision that the political careers of Democrats outweigh the arrest of a man who is both an illegal immigrant AND a registered sex offender. It seems Menendez and his male intern(s) have much in common. And "father" Obama approved. He is VILE.

Related links... The Obama-Sandusky connection: Graham Spanier.
The Obama administration has an "expert at cover-ups" working for them. Last July, Emily Heil of the Washington Post wrote about it in her article Graham Spanier's gig as a federal worker is a mystery:


Graham Spanier might have been ousted from his post at the helm of Penn State over the sex-abuse scandal that engulfed the university, but it seems he's found a backup employer: the American taxpayer. ... His lawyer confirms to the Loop that Spanier is working on a part-time consulting basis for a "top-secret" agency on national security issues. But the gig is so hush-hush, he couldn't even tell his attorneys the name of the agency. In April — months after his ouster as president but before the release of the internal report — he told the Patriot-News of central Pennsylvania that he was working on a "special project for the U.S. government relating [to] national security."


The other shoe dropped last November when Sara Ganim reported: "Former Penn State president Graham Spanier has been charged with obstruction, endangering the welfare of children and perjury related to the Jerry Sandusky case."

NOTE: Barack Obama has a history of making disturbing decisions.
In 2009, Pamela Geller reported: President Obama has appointed Kevin Jennings, founder of GLSEN (Gay, Lesbian, Straight Education Network) — which sponsored the conference that produced the notorious "Fistgate" scandal (in which young teens were guided on how to perform dangerous homosexual perversions including "fisting") — to head up "Safe Schools" efforts at the Department of Education. Jennings is a vicious, anti-religious bigot who once said "[F–k] 'em" to the "Religious Right." He supports promoting homosexuality and gender confusion as normative to even young students.  He made that comment in a New York City church.

At this point, I can only echo what a Facebook friend of mine said:

The Weekly Standard's Daniel Halper reports:
If Senator Bob Menendez of New Jersey is found guilty of traveling to the Dominican Republic to engage in sexual intercourse with underage prostitutes, he could face up to 30 years prison. The appropriate law, which would seem to apply in this instance, is the Prosecutorial Remedies And Other Tools To End The Exploitation Of Children Today (or the Protect Act). Menendez voted for the law when he was a member of the House of Representatives. "TRAVEL WITH INTENT TO ENGAGE IN ILLICIT SEXUAL CONDUCT," the law reads. 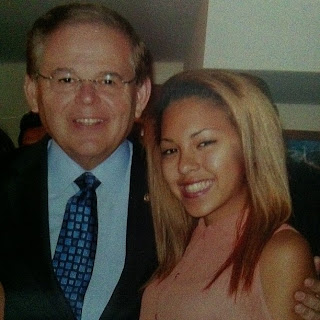 Dominican Prostitute in Menendez Scandal Says They Were 'Very Mistreated'

Prostitute: "They threatened those girls and told them to not talk, and that they couldn't leave." 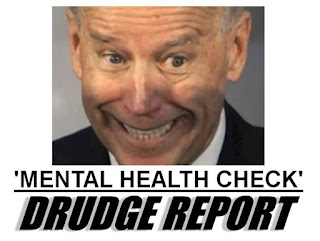 I'm sure that I'm not the only one who saw the above-the-fold 'MENTAL HEALTH CHECK' headline below the image above and thought, "So it's true. Our Vice President ISN'T right. I knew it!"
[And still know it.] Even before getting to the actual story, I was already thinking who might be selected as Joe Biden's replacement. But alas, Drudge got me...and all those who read between the lines. Gotta love it.

In his resonating 'I Have A Dream' speech, Dr. Martin Luther King Jr. warned of "drinking from the cup of bitterness and hatred."

Sadly today, by preaching the politics of envy and class warfare, a divisive Barack Obama serves up that cup to Democrat Party minions who greedily guzzle from it.

Because of that, I cannot fathom how anyone who really celebrates Martin Luther King Jr. Day would ever vote (for a) Democrat.

Democrats: The Missing Years -- "The party that championed slavery and segregation erases its race record from history."

The DNC's Bold Lies -- "The lies are big, bold and prominent. ... literally akin to writing a history of Germany that ends in 1933 and resumes in 1946, neatly skipping those historic trivialities of Adolf Hitler, the Nazis, and the mass murder of six million Jews (not to mention that small skirmish called World War II) — why is there any surprise, any surprise at all, at the recent repeated surfacing of the culture of racism — judging others by skin color — by Obama media allies and politicians? This cultural rot has been the backbone of American liberalism and its political party the Democrats — for 212 years. No wonder the DNC feels it has to lie." ~Jeffrey Lord


Text of Dr. Martin Luther King, Jr.'s 'I Have A Dream' speech

Amy A. Kass and and Leon R. Kass on The Meaning of Martin Luther King Jr. Day, as part of the What So We Proudly Hail project
Facebook: What So Proudly We Hail
Posted by Joe Kidd at 12:48 PM


***Spoiler Alert*** An alternate ending to Orwell's 1984: "The Obama worshippers gazed up at the face that took scant seconds to fall in love with: The sneers behind the ears of this Snob behind the Mob. Tears trickled down their mindless mugs as joy surged through them. They were left with zero and the fetid smell of death sweet in their nostrils. Soulless zombies traipsed by, all weak-in-the-knees and soon to be on them. The Obama worshippers fell in line and joined the swollen ranks, smiling and knowing their struggles were now over. They had won the﻿ victory over themselves. They loved Obama."

Bonus: Some "ear and eye candy" below for Obama worshippers, who will love it -- Big Brother says so. Starring Barack Obama, Oprah Winfrey, George Soros, Maxine Waters, Moveon.org and Louis Farrakhan in their own words. "Yes. These are their actual words."