Say "HELL NO!" to the Obama/Gang of Eight abomination of an immigration bill!

6/26 New from Doug Ross: How can illegal aliens be in "the shadows" when each one receives thousands of dollars in benefits each year?

• was negotiated behind closed doors,

• has ANOTHER STIMULUS for Obama,

• would give Democrats a permanent majority,

• is over a thousand pages long and weighs nearly thirty pounds,

• NO MEMBER OF CONGRESS WHO SUPPORTS IT ACTUALLY READ,

• is backed by a Democrat who rallied with Communists supporting it,

• is more lenient to law-breaking criminal illegal aliens than it is to legal immigrants and US citizens,

• was so deceitfully sold that faux "conservative" and "evangelical" political action "front" groups were created just to sell it,

• gives DHS Secretary Janet Napolitano the discretion to further gut border security, this following her stunning Senate hearing testimony after the Boston Bombing when she admitted that she knew terrorist Tamerlan Tsarnaev had taken a trip last year to Russia and she STILL let him come back into our country...

After all that and the threats we're now hearing from rabid Democrats if it doesn't pass, you know what I say to those trying to make this abomination of an immigration bill become law?!?

The links in order of points made...


Border Patrol Agent: Napolitano has no idea what we go through
http://townhall.com/tipsheet/katiepavlich/2013/04/02/border-patrol-agent-napolitano-has-no-idea-what-we-go-through-n1555391


[VIDEO] Obama to leave "large portions" of our border with Mexico OPEN FOR HOURS because of sequester cuts…
http://weaselzippers.us/2013/03/27/obama-to-leave-large-portions-of-border-with-mexico-open-for-hours-at-time-because-of-sequester-cuts/

Barack Obama, the Drug War, and 60,000 Dead in Mexico:
Failure Is an Option
http://blog.heritage.org/2013/05/02/president-obama-the-drug-war-and-mexico-failure-is-an-option/

Operation Fast and Furious and the massacre of Mexican kids
http://frontpagemag.com/2012/joseph-klein/operation-fast-and-furious-and-the-massacre-of-mexican-kids/

A bill that DESTROYS our economy... The Slipperiest of Slopes:
Immigration 'compromise,' a really bad deal in any economy
http://www.redstate.com/2013/03/30/the-slipperiest-of-slopes-immigration-compromise-a-bad-deal-for-the-economy/

Something refreshing if you've made it this far...
"Virtual President Bill Whittle takes a question on immigration at a Virtual Town Hall meeting located not far from the Mexican border"

Politico lets the cat out of the bag:
Immigration "reform" would give Democrats a permanent majority
http://directorblue.blogspot.com/2013/04/politico-lets-cat-out-of-bag.html

SENATE TO VOTE ON IMMIGRATION BILL BEFORE READING IT...
http://www.weeklystandard.com/blogs/kristol-gop-senators-should-block-immigration-monday-let-us-and-them-read-bill_736962.html

Under this abomination of an immigration bill, crime pays! 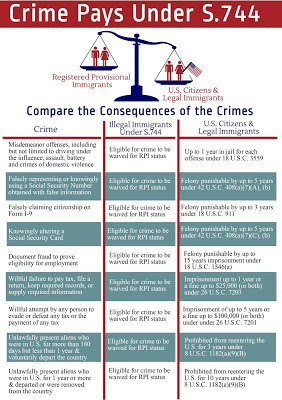 Guess who is behind [the bill's] 'conservative' radio and TV ads?
http://canadafreepress.com/index.php/article/55893

A look through different sections of this bill will make one ill:

Victor Davis Hanson: Near-Suicidal Immigration Policies
What does it take to get deported? More than you would think.
http://www.nationalreview.com/article/346535/near-suicidal-immigration-policies

Daniel Horowitz: The Worst Piece of Legislation in American History
The bill grants "Permanent Defacto amnesty," "permanently ties the hands of border agents," and will "void out all deportations."
http://www.redstate.com/2013/06/22/the-worst-piece-of-legislation-in-american-history/

Finally, the names of the 15 Republican senators who were complicit in ending debate on the "Border Security, Economic Opportunity, and Immigration Modernization Act"  and allowing it to move forward in the Democrat-controlled Senate:

They should all be held accountable for their atrocious actions!

The most vile Obama photo-op ever...

Will Obamacare be a future Cause of Death?