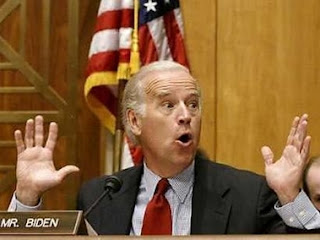 Vice President Biden is The Gaffe Machine but this run he’s on now makes me wonder. That’s why in all seriousness I ask the following:

(1) Assuming Biden is of sound mind, would he intentionally overplay his foot-in-mouth disease to change the ticket? Would Obama hatch such a scheme if he thought it would get him reelected?

(2) On the other hand, if it was known that Biden had Dementia, would Obama keep that under wraps until he could leverage it for political gain? I’m alarmed these questions even seem viable but we’ve already seen this regime lie, cheat and steal then cover it up to further their ends. That’s why I cannot put ANYTHING past Obama -- he is in it to win. 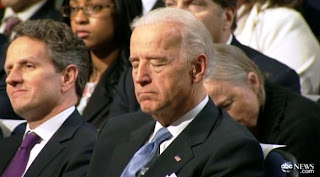 In either case, hypothetically speaking, the Obama campaign would still stand behind anything Biden said and the “mainstream” media would play that up (as they are doing now) hoping to garner sympathy for the man until their “Dementia story” -- whether true or not -- was released. Recall that prior to the 2008 election, the Journ“O”List coordinated attacks against Obama detractors and suppressed any news that would harm him. (The “O” stood for Obama!) Who’s to say that could not happen again? For our (illegitimate?) president, the rewards outweigh any of the risks. In fact, I would argue that Obama think himself so immune, he has already drafted a letter pardoning himself!

Post-DNC coronation, Obama would get to leave Charlotte with the bump he craves and his Dem base all fired up (unlike now). And “Mo” would on his side -- that powerful electing force called Momentum. Biden as a topic would come off the table because the “evil” GOP would be cast as bullies of a “helpless” man. More importantly, Paul Ryan’s takedown of Biden would never happen. I hope that’s not “the plan” -- I’m no conspiracy theorist -- I’m just thinking outside the box. I don’t want to see any October or any month election surprises of any kind.

If the above seems far-fetched, please consider this: If you were told after 9/11 that before the decade was up, a man with an unknown past and Hussein for a middle name would become our president, you probably would not have believed it. For those who say that speaks to the greatness of our country, I understand but say this in response: That same man argued for a mosque at Ground Zero and now invites Muslim Brotherhood terrorists to our White House as his guests. Think about that!

Finally...
Krauthammer On Biden: “Is it a big f-ing deal? I don’t know… I’m just quoting the Vice President of the United States.”

THIS man is a HEARTBEAT AWAY
from the presidency...or is he???
Posted by Joe Kidd at 3:46 PM