The Obama-Osama Files: The “gutsy” call, “spiking” the ball, a movie, and the leaks.

Talk about Wag the Dog. Kathryn Bigelow, the director of Zero Dark Thirty, was given unprecedented access to classified intelligence and she received Obama’s own talking points -- she’s a huge supporter -- so that his role and so-called “gutsy decision” would be played up in the film despite the fact the “kill” mission was postponed at least three times for political reasons.

US Navy SEALs have slammed their “Commander-in-Chief” for taking undue credit, “spiking the bin Laden football” and for divulging the identies of Special Forces operators and using them as “ammunition” in his never-ending reelection campaign.

Once again, President Obama uses OUR country’s troops and leaks national security information for HIS political gain. He is a disgrace.

Obama’s call was not so “gutsy” after all...
The Daily Caller’s David Martosko: At the urging of Valerie Jarrett, President Barack Obama canceled the operation to kill Osama bin Laden on three separate occasions before finally approving the May 2, 2011 Navy SEAL mission.

In ”Leading From Behind: The Reluctant President and the Advisors Who Decide for Him,“ Richard Miniter writes that Obama canceled the “kill” mission in January 2011, again in February, and a third time in March. Obama’s close adviser Valerie Jarrett persuaded him to hold off each time, according to the book. “President Obama’s greatest success was actually his greatest failure.”
http://dailycaller.com/2012/07/29/obama-canceled-bin-laden-kill-raid-three-times-valerie-jarrett/ 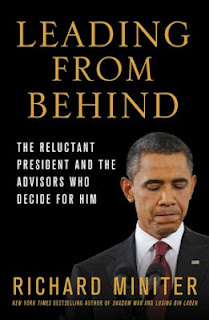 Former Attorney General Mukasey: The Obama Administration drafted a “highly lawyered” memo to shield the president from blame if the mission to kill or capture Osama Bin Laden failed.
http://freebeacon.com/admin-drafted-memo-to-shield-obama-if-obl-raid-failed/ 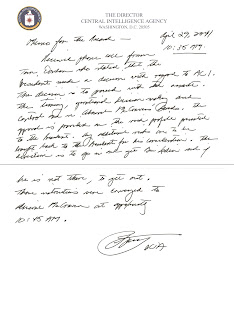 Ben Shapiro writes that “…the memo doesn’t show a gutsy call. It doesn’t show a president willing to take the blame for a mission gone wrong. It shows a CYA maneuver by the White House.”
http://www.breitbart.com/Big-Peace/2012/04/26/Get-bin-laden-memo-CYA

“Spiking the bin Laden football”
Serving and former US Navy SEALs have slammed President Obama for taking the credit for killing Osama bin Laden and accused him of using Special Forces operators as “ammunition” for his re-election campaign. … Mr. Obama has faced criticism even from allies about his decision to make a campaign ad about the bin Laden raid. Arianna Huffington, an outspoken liberal who runs the left-leaning Huffington Post website, roundly condemned it. She told CBS: “We should celebrate the fact that they did such a great job. It’s one thing to have an NBC special from the Situation Room... all that to me is perfectly legitimate, but to turn it into a campaign ad is one of the most despicable things you can do.”
http://www.dailymail.co.uk/news/article-2137636/Osama-bin-Laden-death-SEALs-slam-Obama-using-ammunition-bid-credit.html 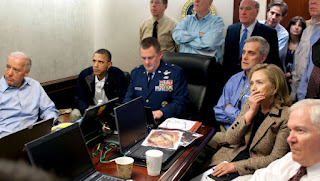 Washington Post’s Dana Milbank boards the “anti-Obama” train:
The preezy of the United Steezy is making me queasy. I’m not troubled by Obama’s slow jam with Jimmy Fallon, who dubbed the commander in chief “preezy” during Obama’s appearance on late-night TV. No, preezy is making me queasy because his nonstop campaigning is looking, well, sleazy — and his ad suggesting that Mitt Romney wouldn’t have killed Osama bin Laden is just the beginning of it. In a political culture that long ago surrendered to the permanent campaign, Obama has managed to take things to a whole new level. According to statistics compiled for a book to be published this summer, the president has already set a record for total first-term fundraisers — 191 — and that’s only through March 6. Measured in terms of events that benefit his reelection bid, Obama’s total (inflated in part by relaxed fundraising rules) exceeds the combined total of George W. Bush, Bill Clinton, George H.W. Bush, Ronald Reagan and Jimmy Carter.”
http://www.washingtonpost.com/opinions/president-obama-campaigner-in-chief/2012/04/30/gIQATAfbsT_story.html


“Our Service Members sacrifice to protect our country.”
“Not to benefit his political campaign.”


Obama killed “Geronimo” at “Zero Dark Thirty”
Feature-length Obama commercial to open a month before election in a theater near you!
Maureen Dowd on August 6, 2011: “The White House is also counting on the Kathryn Bigelow and Mark Boal big-screen version of the killing of Bin Laden to counter Obama’s growing reputation as ineffectual. The Sony film by the Oscar-winning pair who made “The Hurt Locker” will no doubt reflect the president’s cool, gutsy decision against shaky odds. Just as Obamaland was hoping, the movie is scheduled to open on Oct. 12, 2012 — perfectly timed to give a home-stretch boost to a campaign that has grown tougher. The moviemakers are getting top-level access to the most classified mission in history from an administration that has tried to throw more people in jail for leaking classified information than the Bush administration. It was clear that the White House had outsourced the job of manning up the president’s image to Hollywood when Boal got welcomed to the upper echelons of the White House and the Pentagon and showed up recently — to the surprise of some military officers — at a C.I.A. ceremony celebrating the hero Seals.”
http://www.nytimes.com/2011/08/07/opinion/sunday/Dowd--The-Downgrade-Blues.html

Dowd Column Lauds Movie Reconstructing Bin Laden Operation To Be Released Oct. 12, 2012 -- Tom Blumer writes: “Beyond the security issues and the potential tastelessness of putting out an election-year commercial posing as a feature film, it is intensely ironic that an administration which has seemed to bend over backwards to avoid offending Muslim and Middle Eastern sensibilities at every turn has no problem whatsoever doing what will from all appearances be a cinematic end-zone dance in front of the entire world.”
http://newsbusters.org/blogs/tom-blumer/2011/08/07/dowd-column-notes-movie-reconstructing-bin-laden-operation-be-released-o

CBS Anchor Charlie Rose: “…it’s no surprise that the Obama administration would enthusiastically welcome a movie about the killing of bin Laden. But some critics say what is surprising is how far the White House was willing to go to get that movie made.”

Ed Lasky writes: “Obama is allowing his Hollywood donors to coin a profit from the heroic bin Laden mission the Seals undertook.”
“Who would have guessed that Navy Seals -- among the most courageous of our soldiers -- have been drafted to serve as Obama reelection campaign volunteers?”
http://www.americanthinker.com/blog/2012/01/obama_exploits_navy_seals.html

(Washington, DC) – Judicial Watch, the organization that investigates and fights government corruption, announced today that it has obtained records from the U.S. Department of Defense (DOD) and the Central Intelligence Agency (CIA) regarding meetings and communications between government agencies and Kathryn Bigelow, Academy Award-winning director of The Hurt Locker, and screenwriter Mark Boal. According to the records, the Obama Defense Department granted Bigelow and Boal access to a “planner, Operator and Commander of SEAL Team Six,” which was responsible for the capture and killing of Osama bin Laden, to assist Bigelow prepare her upcoming feature film. The records, obtained pursuant to court order in a Freedom of Information Act lawsuit filed on January 21, 2012, include 153 pages of records from the DOD and 113 pages of records from the CIA (Judicial Watch v. U.S. Department of Defense (No. 1:12-cv-00049)).

“These documents, which took nine months and a federal lawsuit to disgorge from the Obama administration, show that politically-connected film makers were giving extraordinary and secret access to bin Laden raid information, including the identity of a Seal Team Six leader,” said Judicial Watch President Tom Fitton. “It is both ironic and hypocritical that the Obama administration stonewalled Judicial Watch’s pursuit of the bin Laden death photos, citing national security concerns, yet seemed willing to share intimate details regarding the raid to help Hollywood filmmakers release a movie ‘perfectly timed to give a home-stretch boost’ to the Obama campaign.”
http://www.judicialwatch.org/press-room/press-releases/13421/

Top White House officials worked closely with producers of a movie about the successful killing of Osama bin Laden and pushed them to incorporate the administration’s talking points… The filmmakers “are basically using the WH-approved talking points we used the night of the operation,” according to a June 2011 e-mail Under-Secretary of Defense for Intelligence Michael Vickers sent to the Pentagon’s PR chief, Douglas Wilson. Those talking points described the raid as a “gutsy decision” and played up the president’s role.
http://dailycaller.com/2012/05/22/white-house-officials-shaped-pending-bin-laden-movie/

Leif Babin: Obama Exploits the Navy SEALs
There may be political value in detailing how our special forces hunted bin Laden, but doing so threatens troop safety and future missions. … A week after the bin Laden raid, then-Secretary of Defense Robert Gates expressed dismay about Washington’s loose lips, telling a town hall meeting of U.S. Marines at Camp Lejeune: “Frankly, a week ago Sunday, in the Situation Room, we all agreed that we would not release any operational details from the effort to take out bin Laden. That all fell apart on Monday—the next day.”
http://online.wsj.com/article/SB10001424052970204740904577193024150056072.html
“Leif Babin is a former Navy SEAL officer and decorated combat veteran who served three tours in Iraq, earning a Silver Star, two Bronze Stars, and a Purple Heart. He is the co-founder of Echelon Front, LLC, a leadership- and management-consulting firm.”


Letter to Inspectors General Heddell and Buckley re: ongoing leaks of classified information regarding sensitive military operations.
http://homeland.house.gov/sites/homeland.house.gov/files/08-09-11%20King%20ltr%20to%20DoD-CIA%20on%20bin%20Laden%20Mission%20Film.PDF
Posted by Joe Kidd at 10:40 AM