A case for why governments should NOT negotiate with terrorists

PLEASE SEE UPDATE AT THE END OF THIS POST

Basing an article and headline on one study can be dangerous.
A response to Jason Koebler’s US News and World Report article “Why Government Should Negotiate with Terrorists”

Negotiating with terrorists is successful? Huh?!? In a real world with very real threats, that case is NOT being made.

Consider the obsequious kowtowing from Appeaser-in-Chief Obama towards terrorist-supporting rogue nations whose stated goal is to wipe the only Middle East democracy, Israel, from the map. Where are we on that? On the verge of war.

Consider the slaughter of thousands of innocent lives occurring right now. Where are we on that? More are dying daily.

Consider current policy that both wrongfully grants Constitutional rights to enemy combatants -- effectively protecting them from “good old-fashioned” interrogation -- while at the same time uses drones to surgically remove targets before intel can be gleaned. Where are we on that? “Human intelligence” collection is at a new low with “strategic assets” being put at risk!

Of course, we’re not even sure if any intel that’s acquired is even safe in the sieve that is the Obama White House.

Add on the recidivism where terrorists are released to improve their “quality of life” and then attack us again, and anyone can see clearly that the case for “negotiating with terrorists” is not being made.

But it does explain why the Obama State Department broke the law last June and granted a visa to terrorist and Obama White House guest Hani Nour Eldin -- so Barack Hussein Obama could entertain (negotiate?) Hani Nour Eldin’s plea of leniency for the convicted terrorist Omar Abdel-Rahman AKA “the Blind Sheik” -- mastermind behind the 1993 World Trade Center bombing -- who (for now?) is in a super max for life. 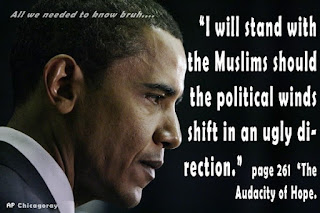 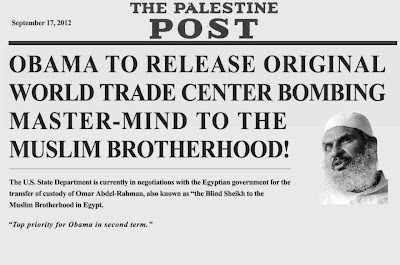 UPDATE: The Obama State Department is currently negotiating the transfer of a convicted terrorist to Egypt.
http://www.theblaze.com/stories/source-obama-administration-in-talks-to-transfer-blind-sheikh-to-egypt/

Obviously the plea of leniency that visa-holding terrorist and Obama White House guest Hani Nour Eldin made last June on behalf of another fellow terrorist -- Omar Abdel-Rahman AKA “the Blind Sheik” -- did not fall on deaf ears.
Posted by Joe Kidd at 8:42 AM