Whether it's ranting or reporting, Bob Costas and his NBC posse are the gang that can't shoot straight

I had already made up my mind upon reading Jason Whitlock's take on the murder-suicide committed by Jovan Belcher before hearing Bob Costas reference the article in his anti-gun rant in the middle of a football game Sunday night on national TV -- that "handguns do not enhance our safety, they exacerbate our flaws, tempt us to escalate arguments, and bait us into embracing confrontation rather than avoiding it."

My first reaction was "Huh? What? Here? Now? Oh yeah, it's NBC." And I turned the channel. I had tuned in to catch the score, not hear from some hypocrite who travels with an armed entourage protecting him. And I found the way Costas came across, stating that drivel so matter-of-factly as if it were gospel, particularly galling. What a fool. It reminded me of his Jerry Sandusky interview debacle on NBC and how that played out -- very disturbing.

It also told me how weak in the mind both Costas and Whitlock are to actually believe that tripe -- to openly admit they cannot even trust themselves to control their will, act with discipline, nor show reason when baited or tempted. It's a good thing that they themselves are not armed. It reminds me of that sign (see below) by the anti-Obama gun store Southwest Shooting Authority that states Obama voters are "not welcome" there because they're "not responsible enough to own a firearm." Both Costas and Whitlock certainly fall into that category. 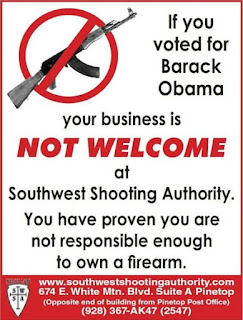 But in the Culture War, Bob Costas achieved his objective -- he got to spout off to a national TV audience -- no matter how many times he has since pretended to walk back what he said. Don't believe him. And don't expect him to use that very same NBC platform again -- Sunday night in the middle of a football game -- and offer up a sincere retraction because we all know that'll never happen.

A more important question that certainly still begs to be asked is "Where was Bob Costas -- or NBC for that matter -- when Barack Obama was giving away "Fast and Furious" guns to that drug cartel scum that leaves body parts behind as calling cards?!?"


AWR Hawkins: "Bob Costas' gun control rant was bad but made worse by one key point -- he lives much of his life with the benefit of armed security, (i.e., men with guns)."

Judge Napolitano: Bob Costas and Jason Whitlock have "no basis" for bringing gun control into the Jovan Belcher murder-suicide

NFL players: Three out of four own guns!

UPDATE: Columnist Who Inspired Bob Costas Drops New Bomb: 'The NRA Is the New KKK'
Does Whitlock not realize that the KKK is a Democrat institution?!?
Democrats: The Missing Years -- “The party that championed slavery and segregation erases its race record from history.” ~Jeffrey Lord

Why I Carry A Gun

What is a "Three Percenter"?

Marko Kloos: Why the gun is civilization

Lock Your Doors And Prepare To Defend Your Family

CJ Grisham’s 13 Rules Of Gunfighting Everyone Should Know

How Blogs Broke the "Fast and Furious" Scandal:
"Before Fast and Furious made its way into the mainstream media, conservative bloggers kept the story alive. Here's how they did it."

David Codrea (Examiner.com National Gun Rights reporter and blogger at "The War on Guns") and Mike Vanderboegh (blogger at "Sipsey Street Irregulars") are the journalists who broke the news on the Operation "Fast and Furious" scandal.
Townhall's News Editor Katie Pavlich has written a seminal book on the subject, "Fast and Furious: Barack Obama's Bloodiest Scandal and the Shameless Cover-Up"